Its ISEA conference day 3 and currently enjoying a keynote on ski and snow sports by a lead designer from K2.

Finally, a good nights sleep after a 30 something hrs journey to get here, a chance to catch up with pals from all over the world and our research centre.

For the first time I am at ISEA with 6 colleagues from Brisbane, usually, it’s a more solitary affair. Jim and David have come via Japan. Jim has been doing a one-year fellowship with centre honorary prof Yuji Ohgi, also we have the ‘other’ David (Thiel) from Colorado – David Thiel our wireless centre director is currently at an antennas conference and will be joining us later. Roving PhD student Jono has also appeared having left Australia a few weeks ago for a USA grand tour.

A couple of days to run, with a few more presentations to give, a baseball game to take in, an expectation of antics at the conference dinner is sure to emerge. Not sure we’ll have the stage show Fozzie gave us in Munich in 2006 but an American BBQ on a farm with various sporting activities and probably beer is a sure recipe for it!! 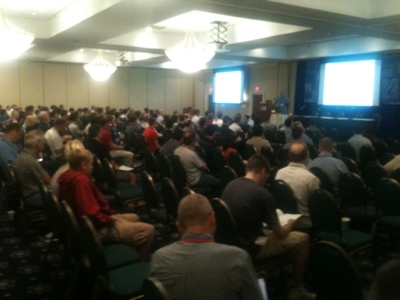