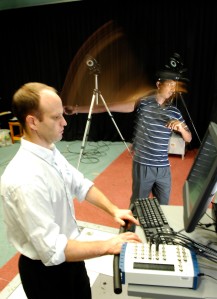 This week discussions over suspect bowling action have again been in the news. The Melbourne Age reports

CRICKET Australia is set to introduce a tougher regime for dealing with illegal bowling actions in domestic cricket.

The move comes amid growing angst from state coaches, who perceive a problem with suspect actions that extends beyond the public allegation levelled at West Indies import Marlon Samuels during the Big Bash League.

Australian officials also hold great hope for new technology that would measure bowling actions in match-conditions. A sleeve, with sensors attached to the bowler’s elbows, was tested during last year’s under-19 world cup, and should be ready for first-class cricket in about two years.

The biomechanist leading the project, Marc Portus, has said the innovation would help rid the game of illegal actions, and remove some of the emotion from the issue by fixing flawed actions before bowlers reached international level.

It would also guard against bowlers modifying their bowling to meet the legal standards in a laboratory, then bending the rules while straining for wickets in the heat of battle.

Its been an ongoing collaboration for a few years and last year we developed a method to measure arm action and have begun trials of the technology. It’s very, very promising. Here are our latest findings published in the Sports Technology Journal (get the full paper here)

Abstract: One of the great controversies of the modern game of cricket is the determination of whether a bowler is using an illegal throw-like bowling action. Changes to the rules of cricket have reduced some of the confusion, yet, because of the complexities of the biomechanics of the arm, it is difficult for an umpire to make a judgement on this issue. Expensive laboratory-based testing has been able to quantify the action of a bowler and this testing is routinely used by cricket authorities to assess a bowling action. Detractors of the method suggest that it is unable to replicate match conditions, has long lead times for assessment and is only available to the elite. After extensive laboratory validation, we present a technology and method for an in-game assessment using a wearable arm sensor for differentiating between a legal bowling action and throwing. The method uses inertial sensors on the upper and lower arm that do not impede the bowling action. Suspect deliveries, as assessed by an expert biomechanist using high-speed video and motion capture reveal valid distinctive inertial signatures. The technology is an important step in the monitoring of bowling action on-field in near real-time. The technology is suitable for use in competition as well as a training tool for developing athletes. Keywords: Cricket, biomechanics, accelerometers, gyroscopes, throwing