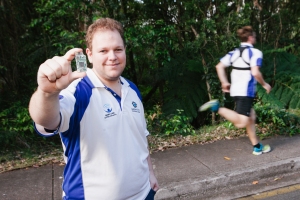 So last week a photographer turned up at SABEL labs and asked us what we had been up to. Here’s a nice story the university wrote about us:

When it comes to recording accurate performance data for elite athletes, GPS technology can’t keep up, a Griffith researcher claims.

Instead, SABEL Labs has developed SABEL Sense, an alternative to GPS for tracking running speeds and distances, which is set to be a game changer in the sports performance and wearable technology industries.

SABEL Sense is timely, as sporting organisations, in particular, consider their options. The AFL recently announced it had switched its GPS provider.

SABEL Labs project manager and research fellow Dr Jono Neville developed a model which presents accelerometers as a viable alternative to GPS in the quest for improved athlete assessment techniques.

His research, titled ‘A model for comparing over-ground running speed and accelerometer-derived step rate in elite level athletes’, is detailed in Sensors Journal, which is currently published online and will be in print next month.

Dr Neville said while Global Positioning Systems (GPS) are an important tool for workload management, the devices have limitations when it comes to changes in speed and direction and when they are used indoors, due to their reliance on external satellites.

He said he compared inertial sensor data with GPS data, collected simultaneously from Brisbane Lions AFL players during 2009, to create a model which was highly accurate for running speeds.

“There is a driving need for emerging technology like this in the sports performance industry,” the microelectronic engineer said.

“When it comes to frequent and rapid changes in speed and distance, GPS just doesn’t cut it, although it’s still the most widely used technology.

“We have found a data processing technique which allows us to extract data from an athlete and create an individualised model. “

Dr Neville said his technology will be key in monitoring training and game workloads.

“This will assist in preventing things such as over-training, which is a major concern for elite athletes, to reduce risk of injury.”

Dr Neville said individualised models are created automatically using SABEL Sense technology which can then be used to track speeds and distances.

SABEL Labs is an entrepreneurial enterprise of Griffith University, specialising in wearable technology for sports and health applications. Its clients include many of Australia’s elite sporting organisations, research groups and Jaybird, a leading consumer electronics international company.

Addendum: It looks like the story has been well received by the press with articles in the Sydney Morning Herald, Brisbane Times (Great title there…how did they work in the Manbra? be careful what you say in an interview), The Age, WA Today,  Canberra Times, Sydney News, Phsy.org, ScienceDaily, ScienceNewsLine, Lockerdome, MyWebmemo, India Today, NewKerala.com, MyInforms, Pune Mirror, Daijiworld.com