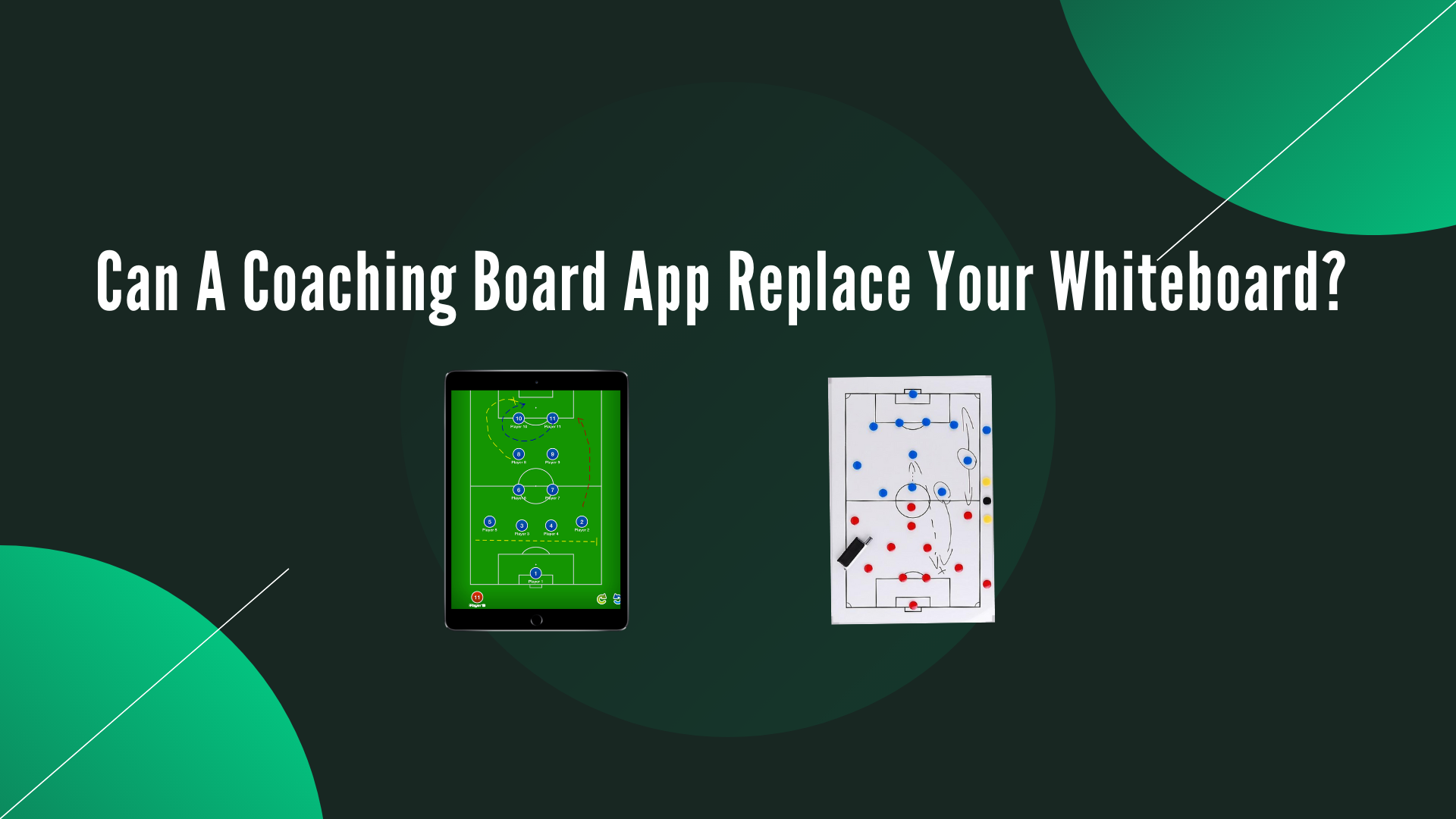 Whether you’re a player or coach a common problem you would have faced is successfully implementing new drills and tactics. In tackling the issue whiteboards have been the traditional weapon of choice. Despite being a powerful teaching tool, there are known limitations.

Perhaps the biggest drawback is the reliance on the coach being present to explain the tactics as well as there being no capability to replay the session when a player is not present or if a player wants to revisit a tactic in their own time.  Bluelinden have identified these issues and have aspired to build on this tried and trusted method through their virtual white board apps for IOS and Android

What The App Does

The Coach Tactic Board series of apps provides users with the familiarity of a whiteboard’s layout with the added functional capabilities of technology. Users are able to setup formations, create tactics and design drills. Both the drills and tactics can be created using over 20 types of equipment such as cones and hurdles. The screen can then be annotated with lines to display player movements and then recorded play by play and outputted as a video. Once exported, the drills/tactics can then be watched at the click of a button and shared amongst players prior to a training session or match. This means less time for coaches explaining drills during sessions and more time for players to do them.

Although this all sounds good on paper, the question remains if a virtual whiteboard dependent on the relatively small screen size of a tablet can really replace a traditional white board?

Which Version of the App To Choose?

Despite similar functionality, there is a separate Coach Tactic Board app for each sport including soccer, basketball, futsal and squash. The apps are further broken down to a free version and a paid version for each sport. While the paid version is relatively cheap $4.99USD or $7.99AUD (IOS and Android) you may feel tempted to stick with the free version of the app as it has many of the same features. That being said the free version does have the regular annoying pop up ad.

There is also the option to buy 6 sports apps in a bundle for $15 AUD. Though more often than not a coach will only be involved with one sport therefore not need all the sports available. Nonetheless, this option may be attractive to sporting organisations involved with several sports. Due to the relatively low cost for the value the app provides we recommend considering purchasing the premium version of the app. Unlike many apps on the market it is just a once of payment so you are not locked into any contract.

For this review we will be looking at the Coach Tactic Board: Soccer++ which is the paid soccer version of the app. A 9.7-inch iPad has been chosen to review the app as it has greater screen real estate than an iPhone. Ideally though, the largest version of the iPad pro would be more suited due to it having a bigger screen. Unfortunately, this wasn’t available to us at the time of writing.

The setup of the app is extremely straight forward. Upon opening it doesn’t ask to create a profile or anything of the like. The first screen you see is a picture of a field with players on it in the classic 4-4-2 formation. The simplicity and directness of this initial screens set the scene for much of the app’s functionality.

The app essentially consists of two key modes. These are the home screen which acts as a traditional whiteboard and the the apps main mode in where you build drills which we will refer to through the review as a “Drill Builder Mode”.

The home screen is setup like a whiteboard in the sense it is made up of a soccer field with markers which are used to represent the home team and opposing players. In this mode there is also the option for annotating the whiteboard with lines, selecting formation and adding player information.

Via clicking the folder button users can select over 50 pre-configured formations. These range from the widely known 4-4-2 to less common 7 a side formations. If you wanted extra customisations such as having your wingers’ wider than a default formation, user can simply drag and drop the player to the position they want. You can also have players outside the field which represent substitutes. We found setting up a lineup to be extremely easy to use and worked smoothly as intended. These custom formations can then be saved and used in future for both this mode and the Drill Builder Mode.

In the settings, the user has the option to select 4 different field backgrounds. These include a full-size field, a half-sized field, a square box and a plain field with no markings. The field colour can also be changed between green, grey or white. Player marker sizes can also be adjusted from normal(which is the largest), medium and small. These provide the user with more than enough options to setup a field for their dedicated purpose whether it be a drill or a squad lineup.

For each player on the screen there are several options to customise. Having names under the player markers is a useful feature to help identify squad members. There is also the option to differ from the single colour circle markers by changing them to images from your gallery. Though this is useful more often than not a one coloured marker is more practical for explanations as it is easier to differentiate between home and opposition teams. Specific positions can also be given with a player. However, we did find it a bit weird that they would refer to a Left Midfield as “ML” rather than the more common “LM” or a Central Defender as a “DC” rather than the more common “CB”. Nonetheless the number of options and convenience of customising players information is quite powerful.

We feel that the home screen mode is best used for displaying a squad’s line up and tactics for match-day. By adding opposing players to the screen with annotations(lines or comments) you can explain how the team should react in a particular situation. You can also add substitute players which are featured outside the field. Once you are happy with your setup there is the option to send a screenshot of your creation via email. This can then potentially be used as a tool to send players match day lineups prior to game day.

The Drill Builder mode is where the app really shines. Here users can create play by play videos of drills and tactics which feature equipment and annotation. To select this mode the user just has to click on the cone icon at the top of the screen. We believed considering this is the apps focal point the icon should be given more significance rather than hiding amongst the many icons scattered across the top of the screen. The below image may better explain our point.

In this mode you can import your settings from the home screen including formation, player information and field layout. If you wanted to start from scratch that can be done too with all the same features as the home screen. The most notable difference with this mode is that equipment can be added to the screen.

The user has over 20 items of equipment to choose from. This includes popup goals, hurdles, cones, balls and player icons. To make the placement of equipment look more symmetrical there is a shape creator where users can select triangle, squares and hexagons guidelines. Unfortunately, shapes can’t be made smaller or larger with one movement rather it needs to be done to corner by corner. Due to this generally resulting in a shape with uneven sides it somewhat defeats the purpose of the shape creator. Despite this limitation we still resorted to use the feature for placing equipment when setting up a drill. Due to the wide range of equipment avavilable at no moment did we feel that we couldn’t design any of the drills we intended to create, whether it be a passing drill, defensive drill or shooting drill.

Creating A Play By Play Drill

Once the drills and players are selected the user can then bring the drill to life by creating a clip play by play. What is required before hand is the setup of the field with players and equipment. Once done you click on the film reel icon located on the top of the screen to begin creating drill. This works much like a stop motion movie in where items need to manually be moved frame by frame. To create a new frame the user simply presses the “+” icon then moves the items they intend to. Once the play and all it’s step are complete the drill can be saved and what you have is a stop motion clip of the drill.

We found this the least intuitive feature of the app as there is no export button. To export the drill as a video, the user has the click on the folder, then swipe left to export. We had to watch the tutorial on Youtube to figure this out. What would have been a better option is having an export button. Once exported the file will be stored in your gallery and able to distribute to anyone you wish.

Sharing Your Tactics With The Team

Despite the apps great functionality the biggest challenge we experienced was the screen size of the device. The iPad Air we used roughly had screen dimensions of 15cm x 20 cm where as a decent sized portable whiteboard is 90 x 60 cm. This disparity in size is made clear in the scaled comparison image below. Due to the iPads small size it makes it extremely difficult to display your drill or tactic to a whole team simultaneously. That being said this could be made more useful by connecting the iPad to a projector. However this would restrict use to only indoors and not on the training. Nonetheless working 1-1 with players or in small groups the iPad still worked effectively to get the message across of a drill. That doesn’t mean the app isn’t useful in a real world setting. We found being able to send drills as a clip to players prior to a session being a better use for this app when working with larger squads.

Though adopting a simple design, the Coach Tactic Board app has more than enough features to design customised drills and tactics. Moving of equipment and players is simple and accurate and pre configured formations make creating a squad lineup quick. This can all be combined in exporting your drill, play by play drill as a stop motion video clip. It would have been nice to be able to create an entire training session mode where you can add all the drills you created, write down notes and export them as 1 file.

The biggest limitation of implementing this in a real world scenario is not the design of the app but more so the device it is displayed on. Generally speaking the screen size of a tablet is inadequate to display a large team of players. This is due to icons being too small. Though this may be overcome by the use of a projector, it then makes the whole thing far less portable. For this reason we believe Coach Tactic Board to be more of a supplementary tool to a coach of a large team than a direct whiteboard replacement. Nonetheless, the app offers great value for money and with the ability to export drills as videos we are confident in continuing to use it for the up and coming 2021 soccer season.